Another look at the new temple from the inside (Photo: Valentin DK)

The Beauty of Honpukuji Temple

A modern take on spirituality

Another look at the new temple from the inside (Photo: Valentin DK)
Valentin DK   Jan 17, 2018 - ใช้เวลาอ่าน 3 นาที

During our trip to Japan, my friends and I took a leap of faith and decided to veer off-road in order to visit the rather unknown island of Awaji. We had the chance to visit many interesting places in this friendly environment where people will do their best for you, even though I recommend speaking a little Japanese to facilitate the conversation. Among the places we visited, I wanted to share about Honpukuji, which is a new temple on an old site.

The temple is located in the northern part of the island close to the city of Awaji, but you will have to pay attention to the signs that read “本福寺” to find it, as nothing else distinguishes it from another temple.

Even when you arrive, the older part of the temple will look like any other one, at least from the outside. However, it’s just a facade that hides an underground temple designed by the famous Japanese architect Tadao Ando.

As mentioned above, the temple site is ancient since it dates back to more than 1000 years ago — Heian Jidai for the connoisseurs — but the structure built by Ando dates back to 1991. It is home to a statue of Yakushi Nyorai, a Buddhist deity meant to protect people from diseases. The statue is designated as a National Treasure.

But to arrive that far you will have to through the graveyard and then cross the thick circular walls that will lead you to a pond where you should see lotuses if you go there during the right season — unlike us — hence its other name, “Water Temple”. From there, follow the stairs that will take you down to this unique circular temple bathed in the typical red colour (shuiro) of the Japanese temples.

If you arrive at the right time during the day the whole place is likely to be blessed by sunrays that will emphasize the colours and shadows of the place. As you can expect in a temple, the place is peaceful and quiet but the fact that this one is underground and that the light comes from above provides a specific atmosphere to it and makes it even more special.

You may have had your fill of crowded temples in Kyoto or Nara but I have never visited anything like this one and I do believe that it deserves your attention as much as the lovely Awaji-shima.

About 10 minutes on foot from the Aesa Traffic Long Line "Tateishikawa" bus stop.

By car, about 15 minutes from Route 28 from Kobe Awaji Naruto Expressway "Awaji IC", or 5 minutes via "Higashiura IC". 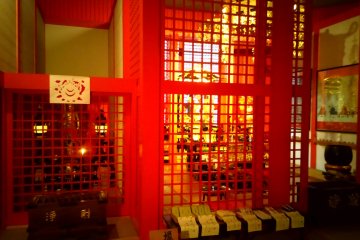 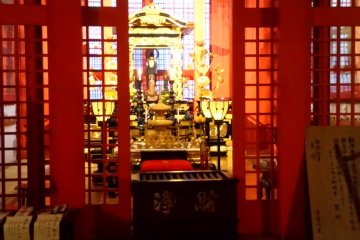 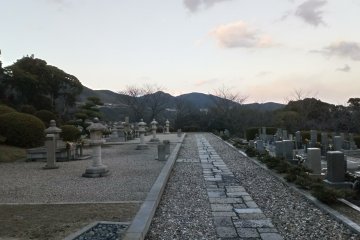 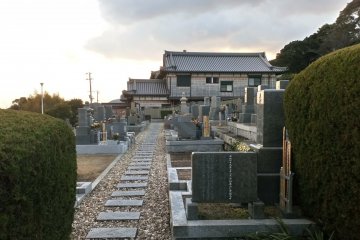