Much more than just another shopping centre

Fukuoka's Canal City is a large shopping complex conveniently situated between Tenjin (downtown area), Nakasu (entertainment district) and Hakata (originally a port city). There are around 250 shops and restaurants, a cinema, a theatre, amusement facilities, a game centre and 2 high-class hotels. A city within a city.

The first time I strolled around Canal City, I couldn't really grasp what it was all about. The futuristic design of the buildings make them look almost as if they come out of a Star Wars film. Though initially seeming painted in a somewhat bizarre mix of colours, the choice of colour is actually that traditionally used for kimonos. Apparently, the concept of Canal City is a "city theatre", with the "people" as the actors. The Sun Plaza Stage located in the centre juts out onto the canal, flanked by a vibrant wall of balconies. The 5 main areas (Sea Court, Earth Walk, Sun Plaza Stage, Moon Walk, Star Court) along the canal are set out in order, traditional to modern themes. The Sun Plaza Stage even has a range of performances and music shows on most days.

The main feature - the canal - runs from one end to the other. A fountain show creates a beautiful display every half an hour, while every hour, the fountains spout streams in time to music. This is especially beautiful at night with the addition of the seasonal displays. I managed to see the contrasting winter and summer decorations. There are also New Year, Spring and Autumn themes. During the Winter decorations, the canal feels icy and everything is covered in twinkling lights, creating a magical, romantic atmosphere. A small pier stretches into the canal, allowing visitors to stand and look out over the beautiful lights and Christmas tree.

Shops range from Japanese brands such as Uniqlo and Muji, to American brands like GAP and Timberland. They even have celebrity gastronomer, Harumi Kurihara's shop, Yutori-no-Kukan. Children, or sometimes even adults like myself, will love Jump (manga shop), Donguri Kyowakoku (Studio Ghibli shop), the Ultraman shop and the Disney shop. If you're after some Japanese souvenirs, there is also Dagashi Yumeya (old-style Japanese toys and sweets), Beniya (traditional souvenirs) and the Hakata Gift Shop on offer. Note that most of the shops offer a small discount to foreign tourists so make sure to bring your passport along. There are also some mobile carts selling shoes, accessories, etc. around the canal area, creating a slightly "traditional vs. modern" feel.

Restaurants range in price, from fast-food to high class. You will find all the usual popular Japanese cuisine there, such as tempura and okonomiyaki, but also crepes, oysters, a Moomin cafe, and Korean cuisine. Make sure to visit the Ramen Stadium. It's a collection of 8 ramen restaurants representing the regional tastes of all Japan. If you want to taste a variety of regional recipes, make sure to ask for taster-sized bowls. Otherwise I doubt you'll be able to taste more than 2! I had quite a bad experience trying to eat full bowls of as many different recipes as possible.

If you're still wanting more, there is also a 13 screen cinema (including an IMAX screen) and a popular games arcade (Taito). On the top floor, there's the Fukuoka City Theatre which shows various plays and musicals including the Lion King (obviously in Japanese).

Canal City is quite welcoming to foreigners. With international ATMs and a friendly help desk, you can relax and enjoy one of Fukuoka's top attractions. It can get incredibly busy at the weekends, so visit in the evening if you're looking for a quiet stroll, but I'm sure it'll be exciting for those who love a bustling shopping atmosphere.

I was born in Osaka, to a Scottish mother and a Japanese father. Lived there for 3 months, then moved to England for 2 years. After that I lived in Düsseldorf, Germany, for 5 years, then moved back to England. In 2010, I spent a year at Kyushu University, Fukuoka. As well as contributing to Japan... 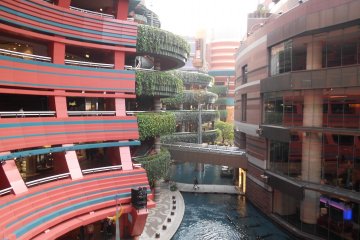