An archive of the architect's works by the man himself

One would imagine that a museum dedicated to the works of Tadao Ando would take on a similar style and feel to his iconic works on Naoshima. The Chichu Art Museum, Benesse House Project and Lee Ufan Museum are often depicted in pictures to have a very distinctive look - clean lines, simple shapes, and a monochromatic colour scheme with lots of grey concrete, an artful use of light - a simplification perhaps of the work of a master.

So to find the museum housed in a small traditional wooden house in the Honmura district of Naoshima, distinguished from its neighbours only by a tidy metal plate declaring it the ANDO MUSEUM was a bit of a surprise to me. At first glance it seems removed from his usual aesthetic, but entering the house, you see how Ando has taken pains to preserve as much of this 100-year old building's shell as far as possible, a principle of preservation and blending in with the surroundings that he has kept to in designing his other structures on Naoshima.

It is as if Ando somehow carefully placed a concrete box within the old wooden walls - the original eaves and rafters contrasting against the more modern slabs of concrete blocks. The walls artfully cut across the space, drawing your eye and guiding you through the space. On display in Japanese and English is a timeline and archive of Ando’s works in Naoshima and other parts of Japan, complete with comments from the architect himself, and some scale models of his work so you can better visualize how his works are conceived.

As with the Chichu Art Museum, it extends the space of the house by going underground - split levels create the illusion of additional space, and a staircase descends downwards to make more room for the exhibition. If you have been entranced by Ando’s work, you might wish that there was more to look at and explore in this small museum, but I think it gives you enough context to Ando’s work. Also, there is no missing his work on Naoshima - Minamidera just a few doors down the road is a building conceived as part of the Art House Project, permanently hosting an artwork by James Turrell and located on the premises of a former temple, and his famous works can easily be found by making your way to the Southern end of the island.

Jaclynn Seah is The Occasional Traveller, inspiring other working people to remember to take that time off and travel a little more. 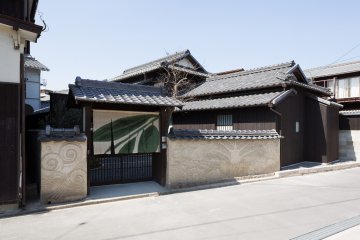