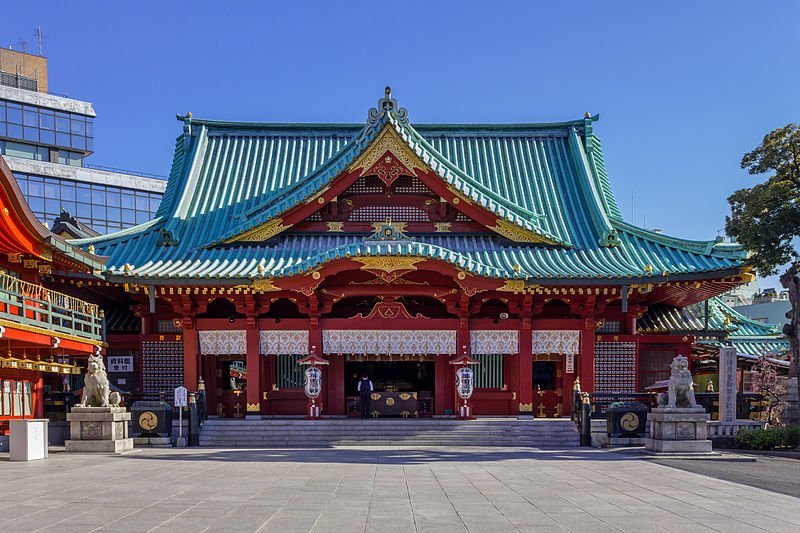 Kanda Shrine (Kanda-myōjin), is a Shinto shrine located in Chiyoda, Tokyo, Japan. The shrine dates back 1,270 years, but the current structure was rebuilt several times due to fire and earthquakes. It is situated in one of the most expensive estate areas of Tokyo. [Wikipedia]

Located right next to Shinjuku Chuo Park, THE KNOT TOKYO Shinjuku is a modern hotel with an exceptional design and easy access to the nearby Shinjuku train station and the Meiji Shrine. The 14-story hotel building was renovated and reopened in August 2018 as THE KNOT TOKYO Shinjuku . The western-style rooms offer a park view on the top floor as well as a newly opened terrace suite. The spacious atrium design offers a relaxed atmosphere and connects the restaurant, bar, lounge and lobby with one another. One of the highlights of THE KNOT is the delicious dishes. There are six areas in which food and drinks are offered. From the grill area to high-quality black tea and fresh bread, everything is on offer.

PIZZERIA & BAR NOHGA is an all day dining restaurant interpreting a fusion of “Spanish Italian” cuisine and has a kitchen to table design. There is a casual bar area and restaurant where you can take a peek inside the open kitchen whilst enjoying your meal. Visit the cafe for a range of coffees and teas along with an offering of tapas snacks and seasonal desserts. The cafe also offers an assorted dessert and all-you-can-drink cafe set. Breakfast takes on the art of sharing, where a range of platters are combined with focaccia and your choice of eggs cooked your way. Coming for lunch? Choose from a selection of pizzas, pastas and salads. Each lunch menu is accompanied with homemade soup, iced tea and focaccia. Dinner time offers a range of exquisite tapas and pizzas that can also be shared. Breakfast: 07:00 - 10:00, Lunch 11:30 - 14:30, Cafe 14:30 - 18:00, Dinner: 18:00 - 23:00 with last order at 10pm.

Ayam-YA is a certified halal ramen restaurant found in the Okachimachi area of Tokyo, between Asakusa and Ueno, and not far from Assalaam Mosque. A sister branch in Kyoto also exists.

The Pokémon Café in Nihonbashi, which opened in March 2018, is the latest character café in the popular series of games and series in Tokyo. The café and the adjacent Pokémon Center DX store were opened in 1997 on the occasion of the 20th anniversary of the first store. The bright café, which is furnished in warm wood tones, offers main courses, desserts and drinks - all of which are arranged with a focus on one or more Pokémon and some are suitable and limited to certain topics or seasons. You can also find exclusive merchandise here - from plush toys in chef jackets to bowls and cutlery with Pokémon motifs. They also sell Pikachu Sweets, special sweets and products with the most popular of all Pokémon as a motif. A visit to the Pokémon Café is only possible with a prior reservation, time slots can be selected from one month in advance and also in English via the website. It is located on the 5th floor of the Nihombashi Takashimaya Shopping Center, which is not far from the Tokyo and Nihonbashi stations.

Yushima Tenmangu, also known as Yushima Tenjin, is a Shinto shrine dedicated to Tenjin, the god of learning. It is conveniently located in Bunkyo City, positioned near Ueno Park and the University of Tokyo, which makes it a popular spot for students to pray for good grades and inscribe ema (wooden plaques) with their academic goals. The shrine is also abundant with seasonal flowers and plays host to lively events throughout the year, including the Plum Blossom Festival, Tenjin Festival, and Chrysanthemum Festival. The shrine was initially founded in 458 as a place of worship for Ame-no-Tajikarao, the god of physical strength. Later, in 1355 the building expanded and became one of the many shrines dedicated to Tenjin, the deified spirit of famous scholar and politician Sugawara-no-Michizane.  The grounds feature beautiful shrine buildings designed in the traditional Shinto architectural style, some which are decorated with colorful carvings of Japanese legends. The Main Hall (or Honden) exemplifies this artistry. Other notable structures are Yushima Tenjin Treasury, a small museum that holds a number of cultural artifacts and paintings, and Omotesando, the copper torii gate at the shrine’s entrance. The torii was designated as a Tangible Cultural Property by Tokyo.

Ameya-Yokocho is an extremely busy street market that runs along the railway line between JR Ueno Station and Okachimachi Station. There are many small retail stores on this street selling seafood, fruits and vegetables, general supplies, as well as shops for discount clothing, accessories, cosmetics, watches and confectionery, as well as a large number of stalls selling street food snacks, as well as inexpensive restaurants, cafes and bars. Originally, the area that is now called Ameya-Yokocho was an inner-city residential area with many wooden houses crowded together. However, during the previous war, the entire area was burned to the ground in a bombing raid. Reconstruction began immediately after the war and a number of shops and street stalls sprang up in the area.

Tokyo Dome City is a multi-faceted entertainment and retail complex in the Bunkyo district. Not to be confused with the Tokyo Dome venue, Dome City consists of the entire area: amusement park, stadium, shopping complex, hotel and even a spa. Although considered ideal Stopover is touted, Tokyo Dome City can easily take more than a day to explore all of the attractions. The Tokyo Dome with 55,000 seats is the home stadium of the Yomiuri Giants. Concerts and festivals are held in the stadium when there are no games. Opened in 2003, LaQua is a popular relaxation oasis with hot springs, saunas and various massage and cosmetic offers. The amusement park features a roller coaster, a Ferris wheel and a tower that lets visitors fall from a height of 80 meters. The Koishikawa Korakuen, a beautiful landscape garden from the early Edo period, is located near Tokyo Dome City and invites you to linger.