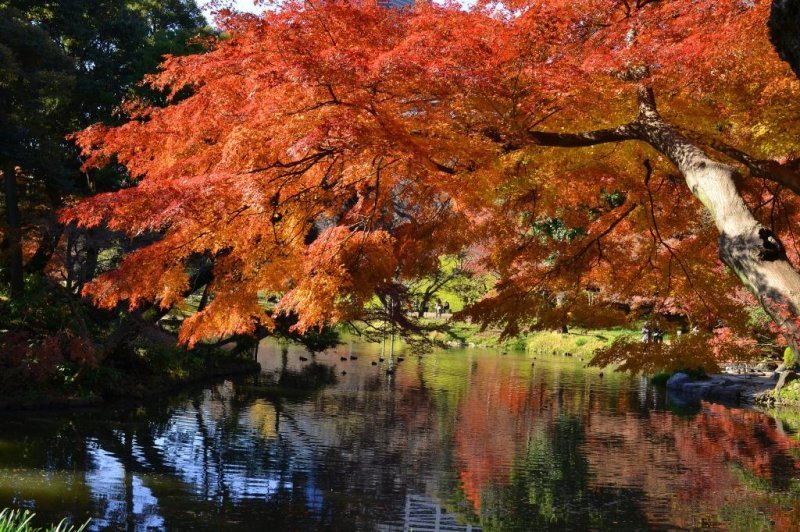 Designated as an important historical asset and site of special historical significance, Koishikawa Korakuen is one of the few gardens that holds this double title. The gardens were originally constructed in 1629, part of the private residence of Tokugawa Mitsukuni during the Edo period.

Access the park by walking from Idabahi or Korakuen stations.

Located right next to Shinjuku Chuo Park, THE KNOT TOKYO Shinjuku is a modern hotel with an exceptional design and easy access to the nearby Shinjuku train station and the Meiji Shrine. The 14-story hotel building was renovated and reopened in August 2018 as THE KNOT TOKYO Shinjuku . The western-style rooms offer a park view on the top floor as well as a newly opened terrace suite. The spacious atrium design offers a relaxed atmosphere and connects the restaurant, bar, lounge and lobby with one another. One of the highlights of THE KNOT is the delicious dishes. There are six areas in which food and drinks are offered. From the grill area to high-quality black tea and fresh bread, everything is on offer.

PIZZERIA & BAR NOHGA is an all day dining restaurant interpreting a fusion of “Spanish Italian” cuisine and has a kitchen to table design. There is a casual bar area and restaurant where you can take a peek inside the open kitchen whilst enjoying your meal. Visit the cafe for a range of coffees and teas along with an offering of tapas snacks and seasonal desserts. The cafe also offers an assorted dessert and all-you-can-drink cafe set. Breakfast takes on the art of sharing, where a range of platters are combined with focaccia and your choice of eggs cooked your way. Coming for lunch? Choose from a selection of pizzas, pastas and salads. Each lunch menu is accompanied with homemade soup, iced tea and focaccia. Dinner time offers a range of exquisite tapas and pizzas that can also be shared. Breakfast: 07:00 - 10:00, Lunch 11:30 - 14:30, Cafe 14:30 - 18:00, Dinner: 18:00 - 23:00 with last order at 10pm.

Ayam-YA is a certified halal ramen restaurant found in the Okachimachi area of Tokyo, between Asakusa and Ueno, and not far from Assalaam Mosque. A sister branch in Kyoto also exists.

The Pokémon Café in Nihonbashi, which opened in March 2018, is the latest character café in the popular series of games and series in Tokyo. The café and the adjacent Pokémon Center DX store were opened in 1997 on the occasion of the 20th anniversary of the first store. The bright café, which is furnished in warm wood tones, offers main courses, desserts and drinks - all of which are arranged with a focus on one or more Pokémon and some are suitable and limited to certain topics or seasons. You can also find exclusive merchandise here - from plush toys in chef jackets to bowls and cutlery with Pokémon motifs. They also sell Pikachu Sweets, special sweets and products with the most popular of all Pokémon as a motif. A visit to the Pokémon Café is only possible with a prior reservation, time slots can be selected from one month in advance and also in English via the website. It is located on the 5th floor of the Nihombashi Takashimaya Shopping Center, which is not far from the Tokyo and Nihonbashi stations.

Tokyo Dome City is a multi-faceted entertainment and retail complex in the Bunkyo district. Not to be confused with the Tokyo Dome venue, Dome City consists of the entire area: amusement park, stadium, shopping complex, hotel and even a spa. Although considered ideal Stopover is touted, Tokyo Dome City can easily take more than a day to explore all of the attractions. The Tokyo Dome with 55,000 seats is the home stadium of the Yomiuri Giants. Concerts and festivals are held in the stadium when there are no games. Opened in 2003, LaQua is a popular relaxation oasis with hot springs, saunas and various massage and cosmetic offers. The amusement park features a roller coaster, a Ferris wheel and a tower that lets visitors fall from a height of 80 meters. The Koishikawa Korakuen, a beautiful landscape garden from the early Edo period, is located near Tokyo Dome City and invites you to linger.

Yasukuni Shrine (Yasukuni Jinja), located in Chiyoda City, Tokyo, was established in 1869 by Emperor Meiji to commemorate and honor those who gave their lives for their country during war time. Today, the shrine is dedicated to nearly 2.5 million souls from a number of conflicts, including the Boshin War, the Seinan War, World War I, the Manchurian Incident, the China Incident, and World War II. Men, women, and children who supported Japan in roles such as, but not limited to, soldiers, factory workers, and civil service workers are worshipped equally regardless of rank, social status, or gender. The shrine solemnly recognizes the names, origins, birth dates, and places of death of these individuals by listing their information on-site. The shrine stands as a solemn reminder of the effects of war with an atmosphere of both respect and tragedy. Though in recent years, Yasukuni has become one of Japan’s most controversial shrines. History of Yasukuni Shrine Emperor Meiji founded Yasukuni Jinja in 1869 during the second year of the Meiji Restoration. During this time, Japan was going through political reform, which sparked an internal conflict known as the Boshin War, where people in favor of military rule fought individuals who aimed to return power to the Imperial court. After this significant event, Emperor Meiji ordered the construction of Shokonsha Shrine, which he later renamed Yasukuni Jinja in 1879, to honor those who gave their lives for this historic change. Emperor Meiji founded Yasukuni to stand as a symbol of the ultimate sacrifices people made to bring peace to Japan. Today, the shrine is recognized as an Imperial Shrine of Special Status. Controversy In recent years, Yasukuni Jinja has seen some political controversy as fourteen convicted class A war criminals from WWII are enshrined among the deified souls. This has put many of Japan's leading ministers under scrutiny for visiting the shrine, related to the principle of separation of church and state. Today Five million people visit Yasukuni Jinja every year to pay their respects to the enshrined souls. The shrine is free to visit and is open year-round from 6:00 to 18:00 (17:00 from November to February). Yasukuni’s entrance is marked by the dominating Daiichi Torii, which is the first shrine gate and one of the tallest torii’s in Japan, standing at 22 meters tall. As visitors pass the threshold onto the sacred grounds, they are enveloped in an atmosphere of solemn serenity. The traditional, yet not overly-flamboyant architecture coupled with the surrounding nature creates a peaceful environment that honors the enshrined souls. Directly past the torii is a bronze statue of Omura Masujiro, the first Minister of War after the Meiji Restoration. Continuing forward, guests will pass through a second torii, named Daini and then Shinmon, a pagoda-style main gate. The main area of the shrine opens up to a courtyard filled with cherry blossoms, which leads to Haiden Main Hall and Yushukan Museum to the right. Yushukan Museum is an impactful building that tells the stories of the countless enshrined souls. Though the museum has also come under scrutiny due to its conservative and biased retelling of wartime events. The museum has an 800 JPY admission fee and is open from 9:00 to 16:30.  For springtime enthusiasts, Yasukuni is also a significant spot as it is home to Tokyo’s representative cherry blossom tree, which is used by meteorologists to announce the official start of the cherry blossom season.  Yasukuni Jinja performs daily rituals where it offers food and words of gratitude to the dead, and twice a year, in spring and autumn, it performs major rituals in which offerings by the emperor are consecrated. Members of the imperial family also take part in these rites. The shrine also plays host to numerous Shinto festivals and rituals year-round.

Koishikawa Botanical Garden, located in Tokyo’s Bunkyo Ward, is a beautifully landscaped naturespace owned by Tokyo University. The garden dates back to 1684 when it was established as a medicinal herb garden for the Tokugawa shogun. The 16-hectare (40-acre) garden is home to 4,000 plant species and includes both a botanical garden and arboretum. In addition to being a public asset to the city, the garden also acts as an extension of Tokyo University where students and professionals can study and research plant life. The garden is also used to conserve and propagate endangered species. Aside from its educational applications, the garden is a popular spot to wander and admire nature. The thousands of tree and plant species, most of which originate in eastern Asia, are immaculately sculpted into a Japanese landscape garden, making for a pleasant stroll. Enjoy camellias, maple trees, bonsai trees, plum trees, and many more! The garden is an especially pleasant spot during cherry blossom season. Being less crowded than other venues, the garden is a relaxing spot to admire the dainty blossoms and features multiple cherry blossom species. Walk along cherry tree-lined paths or picnic under pastel petals. During autumn, visit the park to witness its vibrant red Japanese maple trees. Admission to the garden costs 500 yen for adults and 150 yen for children.